IÂ had an unusual adventure on Wednesday night. I went to the branch office to open it up for a training meeting. While I was waiting with another member a very strong gust of wind slammed the door closed. I did not think anything about it except it was loud until some other members arrived and could not get the door open. I tried from the inside with the same results. It seemed that the violence of the slamming had caused the lock to jam.

I tried everything I could think of – slipping a plastic card into the jam and even taking the lock apart as much as I could – to get it open but to no avail. I was to the point where I figured we either had to call a locksmith or kick the door open when presidentÃ‚Â Lunga NcapayiÃ¢Â€Â‹ came along because his wife was part of the meeting. He figured out how to get the lock to release and let us out and others in so they could do the training.

While they were busy at that he took the lock apart and tried to fix it but again to no avail. He ended up taking out the latching part of the lock but was able to leave the dead-lock so the door could be locked. So while I could have done without this particular adventure, I consider having someone who could solve the problem without resorting to kicking open the door a true tender mercy from the Lord. 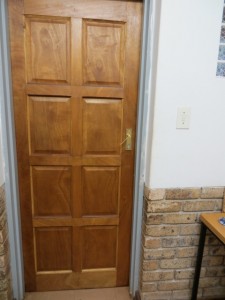 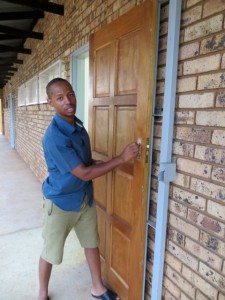 The jammed door from inside and our rescuer working on getting the lock to work. There is never a dull moment when you are on a senior mission.