Today was elder Oldroyd conducted his first District Development Meeting and he did a great job. He was well prepared, moved things along, and gave a good lesson on personal prayer. The Ikageng elders – Liera andÂ Alvial were not present for much of the meeting because the Zone Leaders came down and held an unannounced flat inspection before the meeting.Â 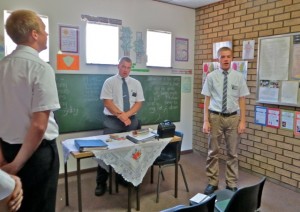 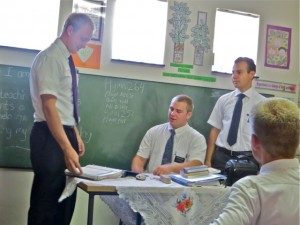 The meeting started with elder McAllister leading the music and everyone else keeping the beat as they continue to learn how to lead. Elder Todd seems to already knows how to lead. After the opening prayer elder Todd – who now serves with elder Oldroyd in Jouberton – led the quote “The Standard of Truth.” Then it is time for each area to give a report on some of those they are working with. Elders McAllister and Di Ruscio reported on serving in Klerksdorp. 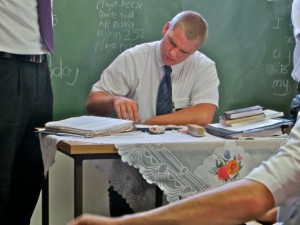 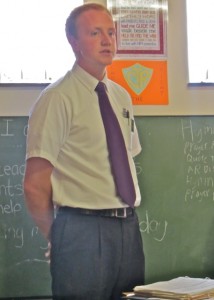 While they were giving there report elder Oldroyd looked to see how well their area book reflected what they were reporting. Area books are very important because if the area gets whitewashed it is the only way the new elders knows what is going on and who has been taught what. 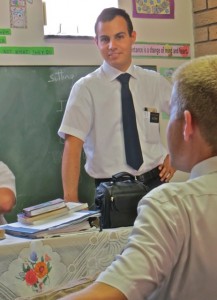 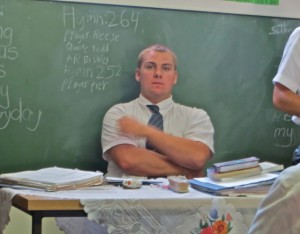 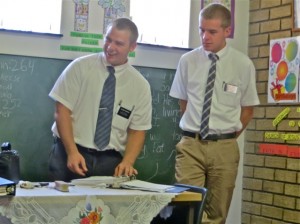 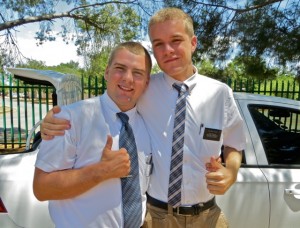 Elders Oldroyd and Todd then reported on their area. Both of the areas have a number of baptisms scheduled for the coming weeks. The ZLs and the Ikageng elders arrived in time to take part in the lesson but I did not take any pictures. After the meeting the elders got to eat some cold apples and chocolate rusks. I like to bring rusks to the meeting because many of the elders have never eaten this South African snack. I got this good shot of elders Oldroyd and Todd. Elder Todd has been in the mission sinceÂ September 2014. After his 3 months of being trained he had the opportunity to trainÂ a new missionary. It is unusual that an almost green missionary does training so the APs and president Dunn must think highly of him. 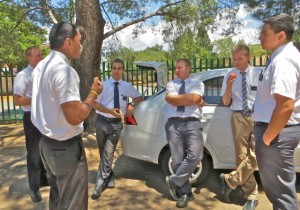 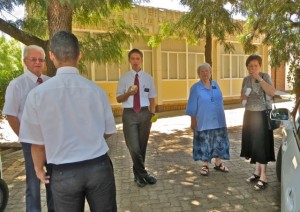 I managed to get all those present at the DDM in these two pictures. However I only got elder Liera’s back. From left to right in the two pictures. Elders McAllister, Elder T,Â DiRuscio, Oldroyd, Todd,Â Alvial, Dummer, Liera, Reese, sisters Pier and Dummer. Hey where is elder Pier?