It is hard to write about our MTC experience because unless you have gone through it, I do not think you can understand how powerful and wonderful it is. This is our third time through the MTC and each time was a little different. The first time there is quite a bit of anxiety because everything is so new. It was a little easier for us because we had spent two years as full time service missionaries at the MTC so we knew our way around.

The second time we went through we were veterans and other than being a little anxious when it came time to teach, we could pretty much just enjoy the experience.

This time we were true veterans and we had just finished spending a year serving as part time service missionaries. We knew what to expect, we knew the great spiritual feeling that is there, and we knew that we could teach the gospel fairly well.

However the experience was still powerful. Even today as we finished up by role playing as less-actives and missionaries working with less-actives there was much to learn. We found that our training better prepared us to teach people and not lessons. We have learned to listen better – both to the people and to the spirit.

At the end of the last meeting of the day/week they showed clips of Elder Holland talking to mission presidents and senior missionaries. In both clips the spirit flowed to a point where I had tears in my eyes.

One of the most rewarding experiences at the MTC is getting to know those couples who came in on the same day. There were 22 couples this time…the smallest group we have been part. But we were told that the number of couples coming in the MTC is up 20% for the year so I guess President Monson’s April talk touched some lives and hopefully Elder Holland’s October conference talk will touch more. 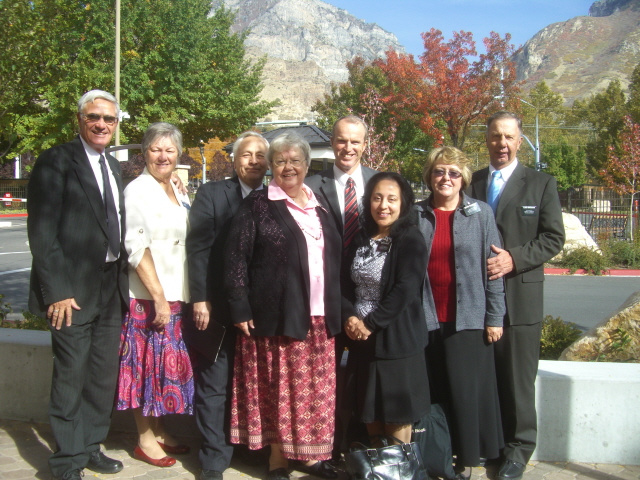 All 22 couples meet for what is called Large Group Meetings but a small group – in our case 4 couples – meet together for most instructions. It is these three other couples that we got to know best and feel very close to. The Miles are going to Kirtland to work with physical facilities, the Lookharts (not Lockharts) are going to Zambia to be Leadership and Member Support missionaries. The Bradshaws will be doing the same thing in Bolivia. Elder Bradshaw served in the same area 40 years ago and are looking forward to revisiting some of the places where he served. Sister Bradshaw and Mary learned Spanish together this week.Â These three couples and ourselves are all eager to get to their missions so they can start serving. However we have another four days at the MTC to learn how to be office specialists. 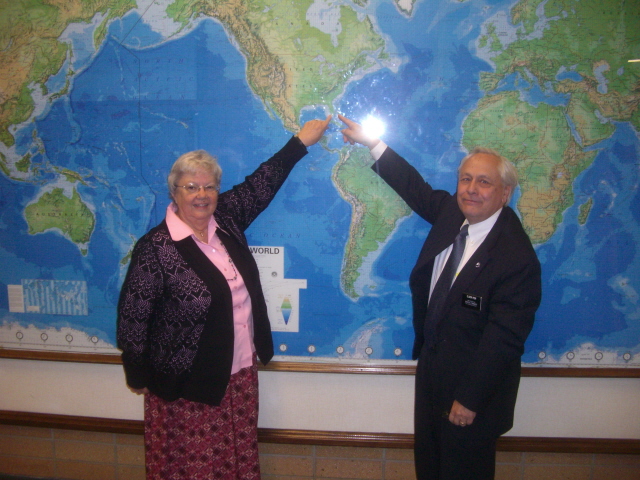 It was a wonderful day for us. We had four of our children, most of our grandchildren, and our cousin/nephew Ed at our house in the morning, at sacrament to hear our talks, and they stayed until we were set apart by President Jackson.

So many tender mercies all in one day.

This is probably the question we are asked most as the days dwindle down before we enter the MTC. Usually I answer I am not really excited because we have done this before and we pretty much know what is going to happen when we get to the MTC and then our mission area.

However we are ready to serve. I told Mary earlier this week that I wish we could just pack up the Dodge and head for Florida right now!

Mary is at the MTC for her first of four days of intensive Spanish lessons. She will spend four hours a day there. Some of the time she will be using the computer to study and the rest of the time she will have a tutor or what is called a ‘study buddy.’ We are not sure what that is but we should know later today.

While she is learning Spanish I am going to go to the temple. The temple is just starting to be build in Fort Lauderdale so we will not be able to go very often. It is always so peaceful to be in the temple and as I came out a sister who exited right after me mentioned how brisk and beautiful the morning was.

Yesterday – Monday the 17th – we had lunch with Ted and Vanessa Baldwin from Richards Bay, South Africa. President Baldwin is the RB district president and I had the privilege of serving in his district council while I was there. They have been visiting family and friends here in the US for the last few weeks. We had a wonderful time catching up on everything that was going on in the district and the people who we got to know and love.

Mary started packing up the kitchen items she feels we will need in Florida. Of course anything we do not pack but will need should be available at our local Costco or other stores.

I have been spending some time on FaceBook chatting with RMs and other friends in Indonesia and Africa. We find it a wonderful way to stay in touch with them. It seems that they are pleased that we remember them and want to Â know what is going on in their lives.

What a wonderful time to live when the gospel is filling the whole world and we are able to chat at the same time with people in England, South Africa, Uganda, Indonesia, Hawaii and Salt Lake. A world of friends are just a few keystrokes away.

John and Donna Bell, two of our Redondo friends, are serving in the Philippines and wrote in their blog the other day that they were able electronically to be in the delivery room when their latest grandchild was born in California. They noted that if they had been at home they would have had to stay in the waiting room. Of course they will have to wait until they get home to hold her but they can watch her grow via Skype.

One of the good things about going on a mission is you must get all your shots up to date. Today we went to the Utah County Health Department and had them check to see what shots we needed to make the missionary department happy. All we needed this time were TDap and Flu shots – one in each arm.

The only thing left for us to get before we enter the MTC is a copy of our driving records. Since we supply our own vehicle we guess that the Church just wants to make we do not have a lot of speeding or other tickets on our records.

Mary continues to take her Spanish lessons and was told today that starting next week she could be tutored for four hours a day starting next Monday. This is because we will enter the MTC the Monday after that. She is not sure she wants to spend that much time studying the language. I suggested that she does just two hours a day…but it is all up to her.

I looked at the weather in Fort Lauderdale today and it was 87 but because of the high humidity it felt like 97. That is taking heat and humidity to a whole new level for us.

Since we have done this a couple of times before, we realized that as the time for our reporting to the MTC became shorter, we would be doing a number of things for the last time. However that does not make it easier to say goodbye to people we have learned to love over the last year.

Last week we served our last shifts at the MTC and the Bishops Storehouse. What made the saying goodbye to the MTC easier was that most of the people we served with had already left. Our wonderful supervisor Dianna who had been our leader from day one came in for the last time just two days before we did.

As a tender mercy, the Lord made our last day very special. People answered their telephones and readily agreed to fill an opportunity. All of the volunteers showed up more or less on time. Mary gave a final lesson on crocheting to Maria who is in charge of the whole tutoring program. So when we shut down the computer and turned off the lights for the last time we walked out with a feeling of satisfaction.

About the same thing happened as we served our last shift at the Bishops Storehouse. Mary’s replacement on the desk handled the shift perfectly. I was able to keep busy helping patrons and working in the coolers. The only downside was that a number of the regulars did not come in so we could not say goodbye. Maybe we will go back on one of the remaining Thursday and see if they are there. Of all the those we served with at the storehouse, we will miss our dear friends the Kirkmans most of all. But we will keep in touch and hopefully see them again before we leave.