When we first started this mission blog back in 2006 I would often post my daily journal and a few pictures. Over the years that has changed because I found that most people really did not want to read everything we did and thought each day so the blog became more a picture story of our mission. But I thought that I would post one day’s journal so anyone reading can get a better idea of what we do and how the Lord blesses us. 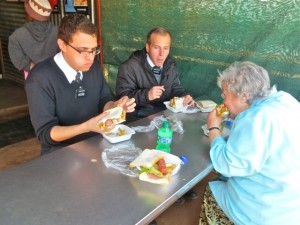 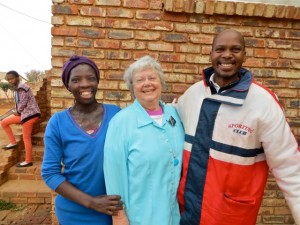 Lunch with the elders – we finally get to eat street food in South Africa – it was very good. We also finally got to take a picture of Lolo and George together. George only has Tuesdays off and most of his free day is spent running errands for the orphanage. When we got there they had a group of local youth in their main room having a social meeting. George said they volunteer to help the group to keep them off the streets. If there were only many more like these two wonderful people the world would be a much better place. 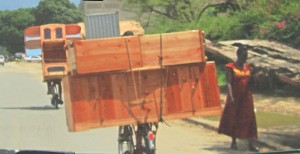 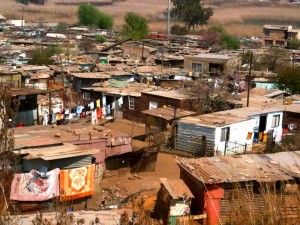 These two pictures are not from today. The one on the right comes from our mission to Indonesia and I just posted it on our FB page to show where there is a bike there is a way. The other is informal housing in Soweto. I posted it on FB to show how too many people have to live here. There were some good comments about the laundry and how with nothing but dirt around them the children manage to look clean and bright.

Slept very well and did not roll out of bed until after 7:00. We had a normal morning and then headed off for Ikageng. Tried to pick up the TV for the orphanage but the one they were going to sell me did not work. So they will either fix it or find another one. It turned out or the best because later when we went by the orphanage with the elders, no one was home. I almost forgot that while I was in the store a woman spoke to me and asked if I remembered her and I could not at first and then I remembered we met her outside of sister L’s house we gave her a card with the elderÃ¢Â€Â™s number but she could not remember or did not want to give us hers. But today she asked for another card and readily gave us hers. So while I did not get the TV, things must have worked out the way the Lord wanted it to.

We met the elders at the school and they followed us to LoÃ¢Â€Â™s house. When we got there she told us that she was sorry but she did not have our number to cancel the appointment to paint her living room – she had to go into Potch to work. However we made an appointment to go back next Tuesday.

We took the elders to the orphanage but as I mentioned before there was no one there so we just left a lot of oranges on the porch. I hope they were there when someone got home.

The elders then invited us to have lunch with them. They took us to a small restaurant inÂ  Ikageng where we finally found out what a Russian was and had a very fulfilling sandwich for a whole $1.10. It was certainly not a fast food place but it was good and filling. Besides we had plenty of time to talk to the elders about their families and other things.

We stopped by the school where we went through the elderÃ¢Â€Â™s keys and found those they will use almost every week. It took time because they had a lot of keys to go through but other than the womanÃ¢Â€Â™s bathroom key everything turned up. After this we parted with the elders and went into Potch where we stopped for some things at a store and then a trip to the key shop to get some keys made so I will have a set of keys when I give mine up to president Kwaikwai.

After a trip home for a short rest and nap we headed back to Ikageng where we visited the Thulo family, then went to the orphanage where we finally got to see George and Lolo together. Our stop was inspired because Lolo needed to visit a woman whoÃ¢Â€Â™s children are going to be living at the orphanage because the mother drinks and neglects them. Lolo also told us that the man who was living with their mother molested the young woman.

Our last stop of the night was at Viona M who had a birthday yesterday. I wished her a belated BD and gave her a candy bar. She told us that the children really liked the meeting they went to last fast Sunday. She also asked us to ask the missionaries if they could come by Monday evening for FHE. She wants them to bring some DVDs. Since there are 3 non-LDS in the family I am sure hey will love to.

So all in all the evening was well spent doing the LordÃ¢Â€Â™s work.

When I posted a picture of us and the missionaries eating lunch together, it was seen by Tom Turek who grew up with elder Perez in St. George. He tagged elder Perez which took the picture to his FB page where his mother and aunt saw it and commented. This led to a chat with elder PerezÃ¢Â€Â™s mother and we now are friends. It is amazing how FB brings people who never would have met together as friends. It also brings joy to a mother who knows her son is well and being watched over. Here was one of her comments…Ã¢Â€Â That is amazing! I hope to serve one day. It is also a blessing for us moms to know that our missionaries have people to love and look after them. I mean I know that The Lord sends angels to look after them, I have never doubted that, but it’s so nice to see the angels.Ã¢Â€Â

I almost forgot another tender mercy that the Lord blessed us with. As we were driving into Ikageng at about 4:30 I saw all these people streaming up the road on their way home and thought how this would be the perfect time to have our display set up. We would see a lot more people than we do on a Saturday. Also we would meet a lot of men and women who had jobs. So I called president KK and told him my thoughts and said it was a great idea. So we will talk about when would be the best time to try this.

Another wonderful day as Senior missionaries in South Africa.