I am sorry that I am so far behind in putting words to the pictures I have posted since we have returned home. I thought I should comment on these photos and tell the stories behind them. On Monday August 24th elder Allred arrived at our flat to pick up all the furniture and other things that belong to the mission. For some unknown reason I did not take any photos of the packing of the trailer and truck. The job was made easy by the help of these four Angels and elder Allred. President Kwaikwai and his wife came to help as did elders Wild and Hentunen. We took final photos with them. They – and elder Allred – were the first Angels to help us on our journey home. 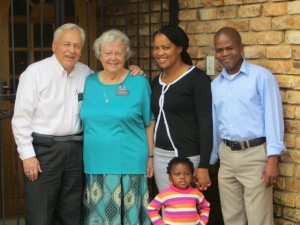 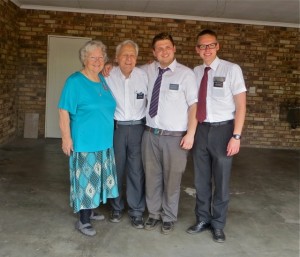 On Tuesday evening sister Dunn took us to the airport where two more ‘angels’ appeared just as we parked. Once again I failed to take any pictures of these un-named helpers who took all our luggage from the van and then escorted us and the luggage through all the ins and outs of getting it on the plane. This included getting it wrapped, showing where I needed to pay for the extra bag, and escorting us to our gate. Without them it would have been a real struggle to get through the check-in process. I gave them each a pass-along card and a nice tip. Even angels need to eat and take care of their families. 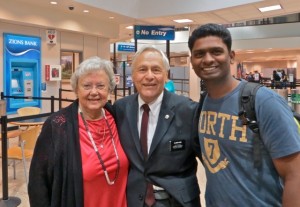 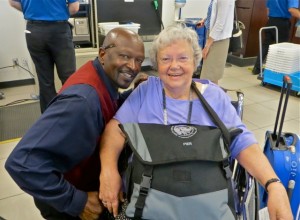 The young man on in the photo on the left is Karhk Radhakrishnan. As we got off the plane in LA we had to board buses. We got to the loading area the first bus had just been filled so we got on the second bus. Mary went to the back so she could sit down but I decided to stand with our carry-on bags so I did not have to haul them up and down the platform. As I standing waiting for the bus to fill this young man introduced himself as a returned missionary from India on his way to Salt Lake to go to LDS Business College. For the next two hours he took care of us and our luggage while we worked our way through the maze that is LAX. Once again I do not know how we would have got through without him. Â Why we know that he was sent to us by the Lord is that he was traveling with his friend who lives in Salt Lake and goes to LDSBC but he traveled on our plane from Dubai to LAX and on to SL because it was much cheaper than the flight his friend took. That is the reason we met him on the bus. If he had flown with his friend as they had planned we would probably never met him.

The next angel the Lord provided was Andrew Jackson – really that was his name – who saw Mary sitting waiting for Karhik and I to return from clearing our bags for the flight to LA. He got her a wheelchair and then escorted us through the maze of LAX to our gate. 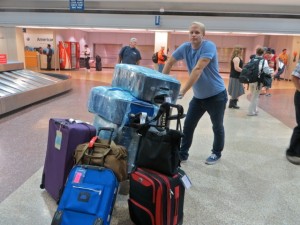 Our grandson Shane Webb took over the gathering and hauling our luggage when we arrived at SLC. We have always thought he was an angel. But the story does not end there. It turned out that the friend that Karhk was traveling with and who he will be living with has been going to LDSBC with Shane and he had even been over to our son Bob’s house recently.

If you believe in a mass of coincidences than there was nothing special about our trip home, but Â we know that the Lord watched over us every step of the way and provided the right person at the right time to get two of His senior missionaries home with minimum struggles and worries.