Friday means that it District Development Meeting. This week was a little different because we held it at the Ikageng office instead of in Klerksdorp. This was due to sister Dunn asking us to take one of the elders to the doctor to have his blood tested. It seems he has not been well for a month or so and doctor Barton wants to make sure it is nothing serious. 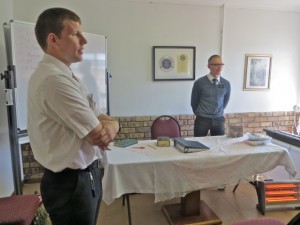 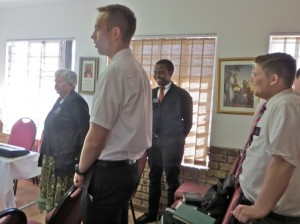 Before the meeting started elder Hentunen had us play a game using the Book of Mormon and elder Turauskis was clearly the champ as he won all but one of the games. The quote of the day was D&C 4 which I actually know. Mary, elders Bergman, Khwela and Wild. 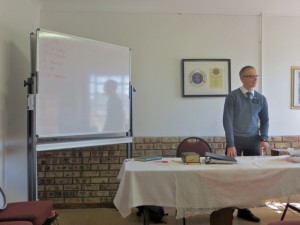 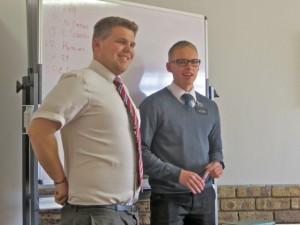 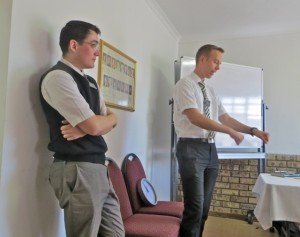 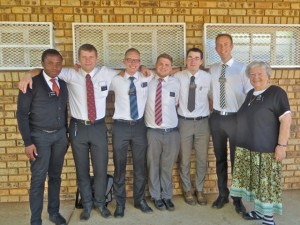 After the reports, the lesson and of course the brownies that Mary made for treats we went outside for a district photo. Â From left to right elders Khwela, Turauskis, Hentunen, Wild, McCartney and Bergman – oh and o course Mary. 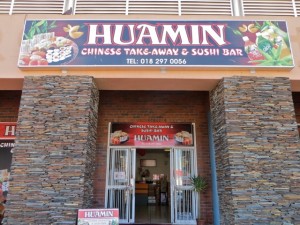 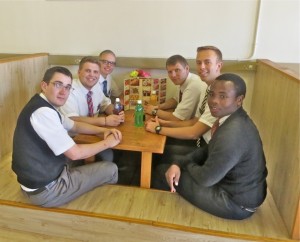 After that the elders went to our favorite Chinese restaurant for lunch while we had shrimp from another shop in the center. Once they had eaten we took the elder and companion to the doctor and then to the clinic where he got his blood taken. The final step in this experience was to take them back to the Potch elders flat where they met up with the other companionship and headed back to the Jouberton/Klerksdorp flat.

Just as we were finishing this up we got a call from president Kwaikwai asking if we could please take care of a food order for a family in the branch. We of course were happy to help by picking up the mother and taking her to the store and then back to her home. The blessings of the fast offerings are one of the great programs of the Church of Jesus Christ of Latter-Day Saints. 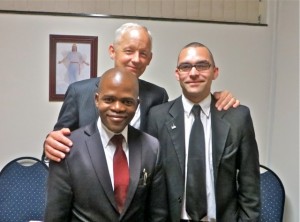 Thursday night we took President Kwaikwai to Klerksdorp for leadership training with president Dunn. I wanted a last picture of the branch presidents we have worked with and learned to love. Unfortunately president Mogapi was not able to attend so I only have this one of presidents Kwaikwai, Robbins and president Dunn.