I got the car washed at the usual place and Â I have gone there often enough that the cashier had already rung up the wash before I came to the counter to pay for it and a liter of Coke Zero. They were very fast today – it took less than 40 minutes and I was the 5th car in line. While I was waiting for them to detail the car, I had a nice conversation with a man whose family has been in South Africa since before 1900 – I did not ask how long. His mother-in-law is 102 years old. He is a lawyer but mainly taught law instead of practicing it. It made the time go much more quickly. 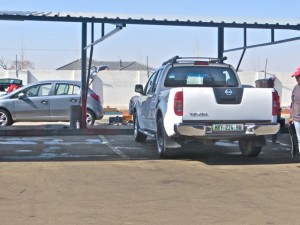 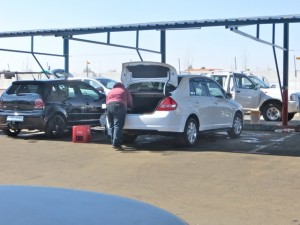 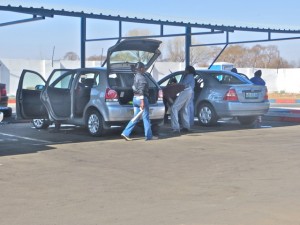 Â Later Mary I went out to take care of some errands – there seems to be lots of them as we wind up this mission – and saw a very large cloud of smoke. We drove over to see what it was and found that one of the fields not far from our house was burning really well. We knew it was a serious fire because there were a couple of fire trucks on one side. This is only the second time we have seen them at a fire in the almost 18 months we have been here. As you can see in one of the photos, there was a herd of horses in the next field over and they decided it was time to move to a different area and they did quickly. 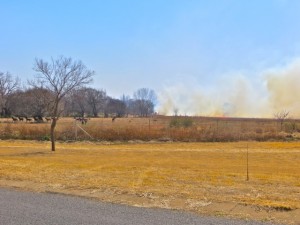 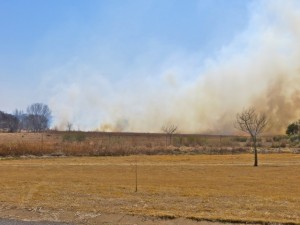 While Mary was in the stationary store buying some supplies, I noticed this man walking by with his load of brooms and feather dusters. We see men and women like this going along the streets around the neighborhood hoping to find a buyer for their wares. I stopped and asked him if I could take his photo and ask some questions. He seem a little nervous about this but said I could. It turned out his name is Ishmael and he has been making and selling these items for 2 years. He nets about 1000 rands a month profit for all his work – that is about $82 US for a month’s work or less than $1000 for the whole year. But with no education or skills, this is not unusual. When we were in Richards Bay we knew a man who worked security – Six 12 hours day a week for 1500 rand – $120 and he thought that was a great job. A McDonald’s burger flipper makes that much in an 8 hour shift!Â 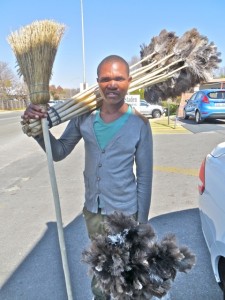