On Thursday April 30 2015 I celebrated my 77th birthday. The night before Mary gave me this beautiful picture of a family of warthogs. It was done by the son of a couple in our ward who is a very good artist. He burns the scene on leather. Mary gave him a choice of doing a scene with warthogs, guinea fowl or giraffes – I am glad he picked the warthogs because I have learned love these ugly beasts. Mary also gave me two pair of warm socks – I will soon need them, a thin tie – elders seem to be wearing them now – and a very warm maroon pullover sweater. 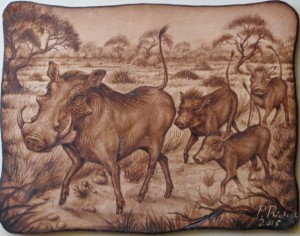 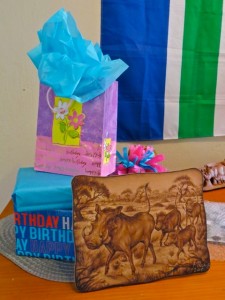 I decided that I wanted pizza for my birthday lunch so we went to Roman’s for the first time in our mission and got two large pizzas – it is the way the sell them. One pepperoni and one Hawaiian. I ate way too much and there was still plenty left over for breakfast, lunch a snack the next day. You can see Mary was thrilled that I wanted to take her picture while we at Romans. 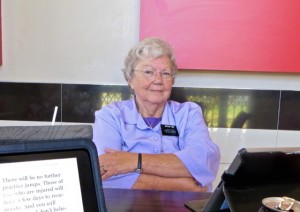 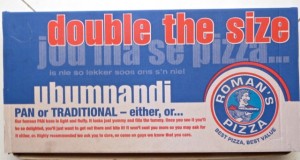 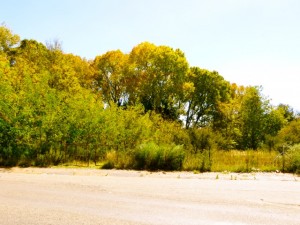 On one of our trips during the day I noticed this grove of trees that was changing color as Autumn continues to move towards Winter. Not as golden as the aspen are during fall in Utah but still very beautiful.

I ended my birthday by us traveling down to Klerksdorp to do the year end audit. Mary came along to keep me company on the drive and she had her iPad for company while I was doing the audit. So started my 78th year on this earthÃ¢Â€Â¦thanks to a loving Father in Heaven and His Son Jesus Christ it has been a great 77 years and I am sure that there are many more adventures and blessings in the year ahead.

Monday we went to YSA FHE where I taught a lesson on the living prophets and then we played Book of Mormon Bingo. We would have played Go Fish – their favorite – but we could not find the cards. It turned out Papa Thulo knew where they were and found them for me on the following Sunday. It is too bad that more YSA do not come to the FHE – there used to be 8 to 10 there when we were teaching before. 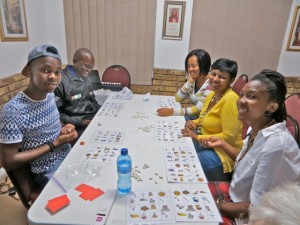 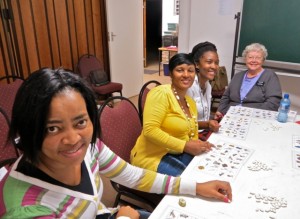 On Tuesday the elder returned our hose that they used to fill the font for Sunday and elder Alvial showed off their dirty car. It is impossible to keep the cars clean because of so many dirt roads in the townships. 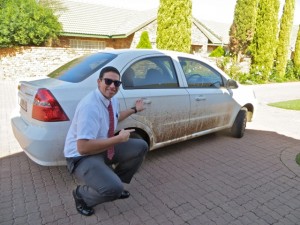 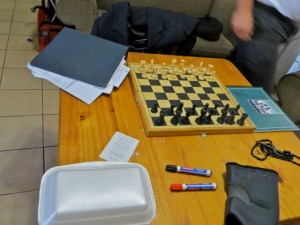 In the evening we went to the office where Mary gave a lesson to sister Lebo. She seems to be doing quite well and is always on time. If she practices she just might be ready to play for the branch after we leave. I took a picture of the school yard and the beautiful sky speckled with colorful clouds. It seems to match the colorful murals painted on the walls of the school. 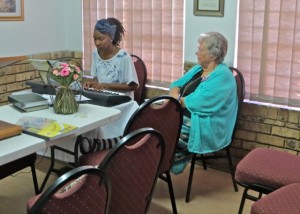 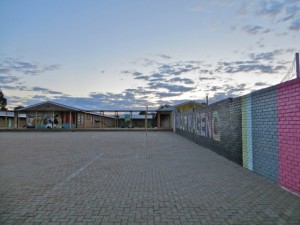 Wednesday we took the elders up to Parys for our monthly visit to sister Bobbi. She has not been feeling well at all and so she did not go for her usual walk with us. The elders prepared and passed the sacrament. 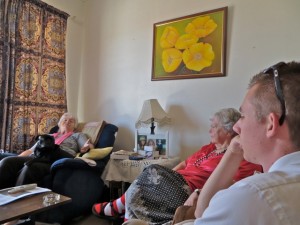 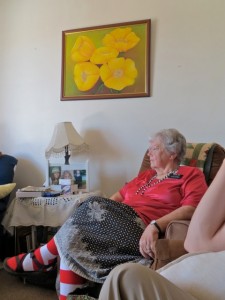 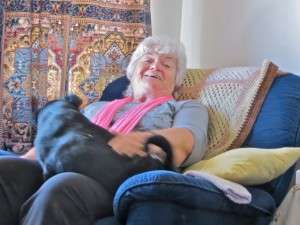 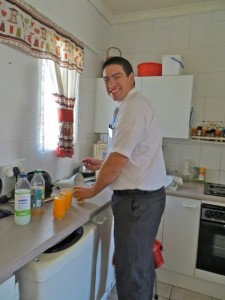 Elder Alvial was in charge of making the traditional cold drink that she offers and we were able to have her almost pose for a picture with the elders. As we started to leave the lock on the door would not work for me or for sister Bobbi but elder Alvial used some love and finally got it open. I had visions of us spending the day locked in her flat. 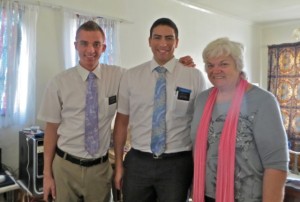 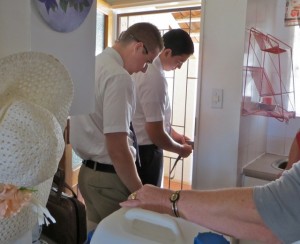 When we were talking the subject of the Cheese cake factory that we pass on our way too and from her flat came up and so I stopped and bought one. The nice baker not only finished the cake for me but also cut off a section so we could leave some with sister Bobbi. The picture below is our portion after dividing the cake up between sister Bobbi and the elders. It was very good indeed. 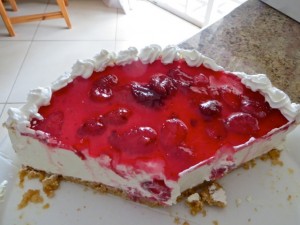