On Saturday I got an SMS from the principal of the school where we hold our meetings telling me that a pipe had burst and basically the school had no water until later in the week. Â I conveyed this to president Kwaikwai and suggested that it would be hard to hold a three hour + block of meetings without any of the toilets working. He agreed and so we only held sacrament meeting and then released everyone to go home.

While greeting members as they arrived we noticed a couple coming towards us. Since they were white and not any of the senior couples we knew about, I thought at first that they might be looking for the other church that meets at the same time we do and has a white pastor.

However on meeting them we found out that they were brother and sister Futter and they had served a mission here in South Africa from 2011-2012. At first they served in the Durban mission in the Bloomfontein area but after 6 months they were asked to change to the Family History Center in Johannesburg. While serving there they drove down to Potchefstroom on Sunday and attended the meetings. They live in England and are visitingÂ South Africa to do family history and genealogy for his family.

It was fun to watch them meet some of the members who were here when they were serving. President Kwaikwai asked them to bear their testimonies during the meeting. After sacrament the Futters asked to have a branch picture. And then I took other pictures of the gathering before people left for the day. Most people love to linger a little longer to talk to the friends they only get to see on Sundays. 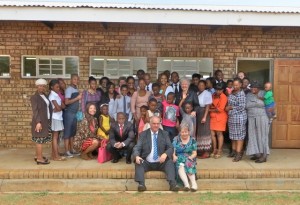 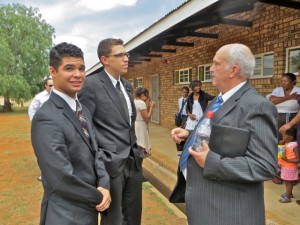 There was a good turnout! We were actually surprised at the number because we knew a number of members were away from home. Elders Liera and Perez talk to brother Futter about how it was in the branch a couple of years ago. The Futters had first gone to the old school where church was held when they were here. They said this one is much nicer. 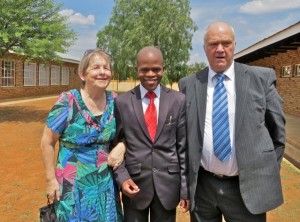 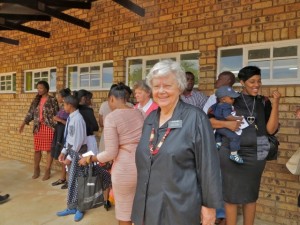 President Kwaikwai was a member of the branch presidency when the Futters were here. I alway like to take pictures of my bride when I get a chance. You can see all the people behind her talking to their friends. 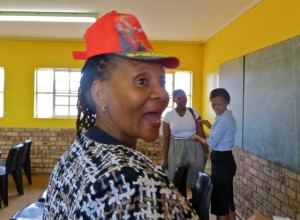 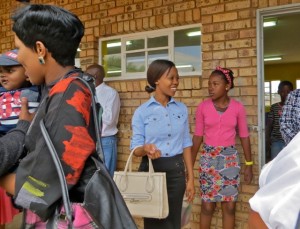 Sister Thulo is our branch music director and I had to take a picture of her in this great hat.Â The Ratema sisters – Maisie and Dolly in the back ground while in the foreground is sister Lydia who was baptized two weeks ago and confirmed this morning. She has to work every other Sunday but comes when she has it off. 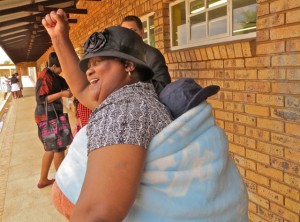 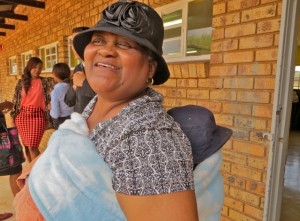 I noticed sister Dorcas and her grandson – he is wrapped in the blanket and is under the hat. Sister Dorcas was baptized last month and seems to always have a smile for everyone. 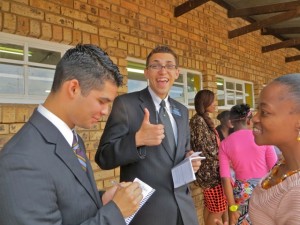 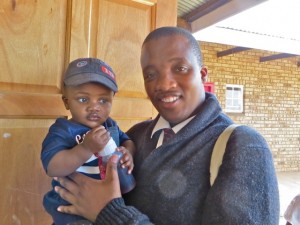 Elder Perez has his thumb up while elder Liera makes a teaching appointment. 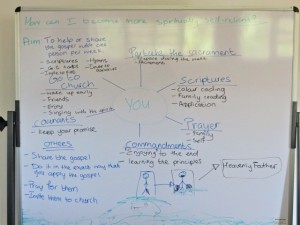 While we were setting up this morning I noticed this whiteboard. It was from a lesson given to the youth last week and it must have been a well prepared one because the board is not only filled with great thoughts but it is also a step by step discussion of how to become more spiritually self-reliant! I am sure the youth went home spiritually fed by this lesson.

Thursday is Seminary where Mary teaches the Book of Mormon. She has from three to six students show up. Much depends on if it is raining, if there is school events going on or if there happens to be a dust storm that makes walking very unpleasant. 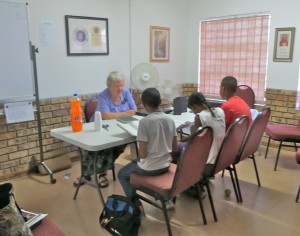 Friday is District Meeting. Usually I take a number of pictures but this week I forgot until right at the end when the meeting was over and everyone was busy eating delicious cocoa-chocolate chip cookies. You can see in the picture on the right that elder Graham has one in his mouth and is busy procuring more on his way out. 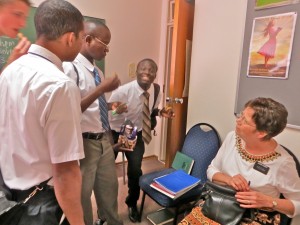 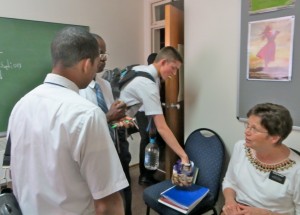 After DM the senior couples went to lunch at Mugg and BeanÂ in the new Klerksdorp mall. It is advertised as the larges mall in the NorthWest and after seeing it, I certainly believe it.

There is a large Spur restaurant in the Mall and the Spur mascot was passing through. When he saw I was taking a picture he stopped and posed. Spur restaurants are named after states in the US – the one in this Mall is the Nebraska Spur.Â The fountains in the picture below are in the middle of what is a very large food court that features both inside and outside dinning. Children seem to love to run through the water – especially now that it is getting rather hot here. I wonder if they will keep it going in the winter when it can get low enough to freeze? 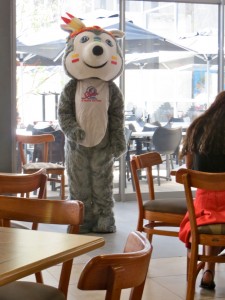 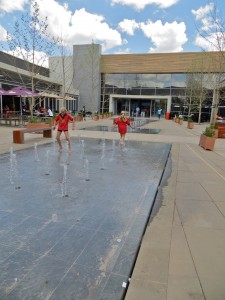 Saturday as were coming out of the Moori River Mall near our home Mary noticed this beautiful rainbow in the distance. 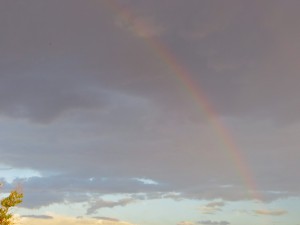 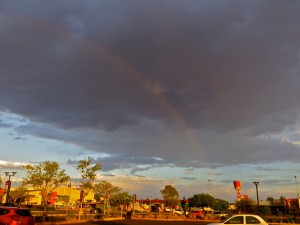 It is getting into late spring here in Potch and while some flowering trees and roses are starting to lose their blossoms, there are plenty of other beautiful flowers emerging. The first five are from our neighbor’s front yard or other areas in the complex 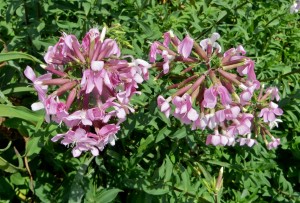 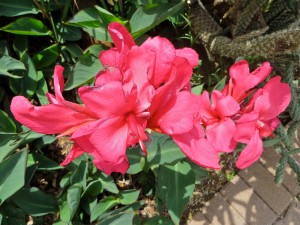 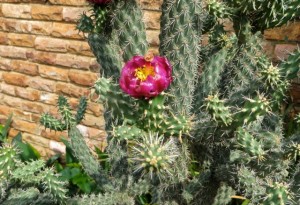 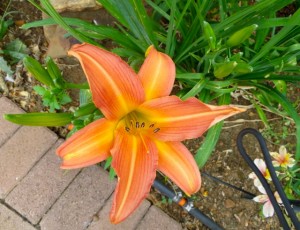 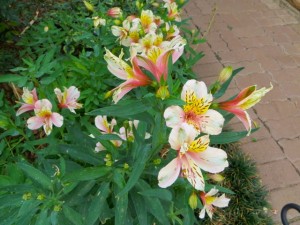 The red and yellow weavers are regular visitors to the Pier’s free food stand in our back yard. Also there are lots of Cape sparrows and doves of every size. The lower left picture captured one male and three female red bishop weavers, two or threes yellow weavers. It is fun to watch them eat but if I try to get closer to them to take a better picture the whole flock takes to the air. 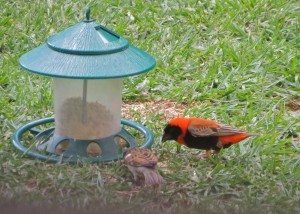 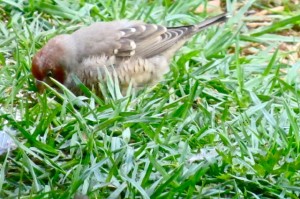 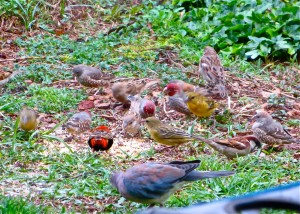