Yesterday we got a text from elder Allred saying that they would be coming to Potch to deliver a new washer to elders Liera and Perez. About noon we met them at the elder’s apartment and while our elders and Allred worked hard to take out the old and put in the new washer. We got to spend some time talking to sister Allred about their mission and their family. 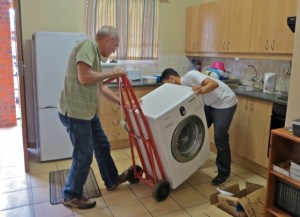 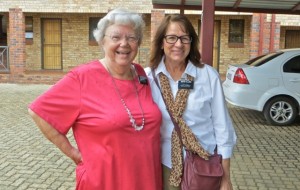 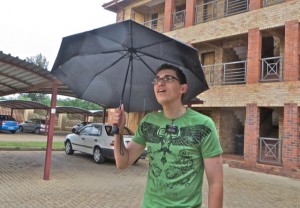 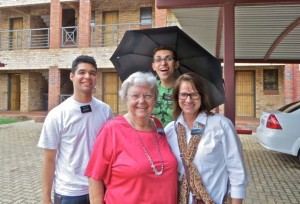 It had been raining most of the morning and it was still coming down when were leaving the apartment to take the Allreds to Ikageng and let them have their first experience with African street food at our favorite Ikageng restaurant – Lagoz. I kidded elder Perez about having an umbrella as real missionaries do not use them. He explained that elder Lohmann had left it behind when he went home. It is a neat little umbrella that fold up into a very small package. 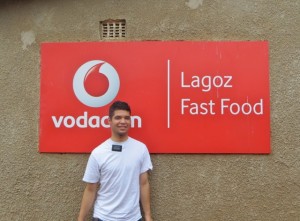 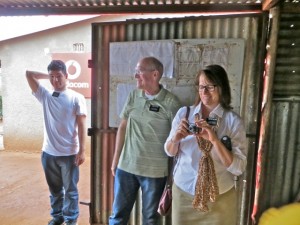 We have shown pictures of Lagoz in other posts. Where Coke usually makes display signs for businesses, Vodacom made this one. The Allreds got a real taste of a township as they chose their sandwiches. They choose to follow Mary and ordered the Backstage. It consists of two slices of fresh white bread filled with a Russian sausage, egg, cheese, tomato, lettuce and chips – French Fries for those who do not know – and sauce. It is a very full meal and costs a full $1.50 US. The elders and myself had the Rhythm City which is just a Russian, chips, tomato and lettuce. I was surprised when Elder Liera ate two faster than I could finish one. BTW the paper on the wall behind the Allreds is the menu. They have lots of sandwiches to choose from including one that is made with a full loaf of bread stuffed with goodies. Elder Perez does not believe any one can eat the whole thing. He gets stuffed with just a quarter loaf sandwich. 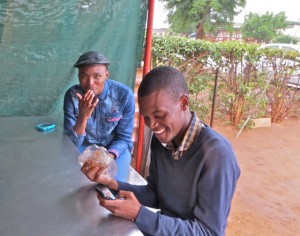 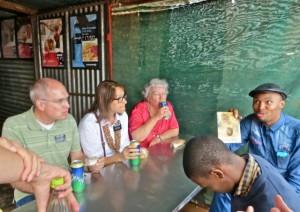 While waiting for our sandwiches, I started talking to these two young men. I kidded that the one man was really talented as he could text with one hand while eating a big sandwich with the other. They started asking about where we were from and what we were doing in Ikageng. They were soon getting passalong cards, pamphlets and then a Book of Mormon. Sister Allred talked to them about the gospel, the Book of Mormon and the restoration. Elder Liera got their names and phone numbers. We also told them about the YSA family home evening that we would be holding at 5:30 at the school and they said they would come but it turned out they did not. Â But hopefully they gave the elders their actual phone numbers and they will get a chance to teach them about the Gospel. We have found that opening out mouths is a very effective way to find those the Lord has prepared to heat the Gospel. 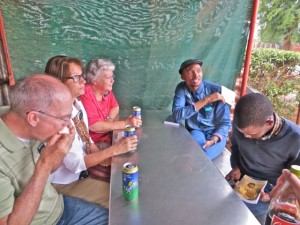 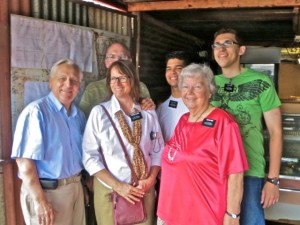 Our new friends took pictures of all of us. Unfortunately elder Allred got pretty much hidden by his wife.

After lunch we took the Allreds on a quick tour of some of Ikageng. We went to an area of the township where there is a lot of informal housing – we would call them shacks in the US. They had seen some at a distance but this was the first time they got to see some up close. We talked about the fact that for many of those living in these very humble dwellings it is step up from what they had in their home countries or areas. Our last stop before taking them back to their van was to show them the school where we hold Church.

it was great to have another couple with us for a few hours and to share some of the experiences we have as we serve.

In the evening we went to the YSA family home evening. Unfortunately only 4 young men showed up – president Kwaikwai, two new converts – Audrey and David, and an investigator who we met last week when he returned the phone the elders left in his home when they were teaching him. But we had fun playing Book of Mormon bingo and eating the small marsh mellows that we use as markers. They agreed that this was a better idea than the dried beans we have used at other times.