The world around us is so interesting and often we are too busy to enjoy all the wonderful sights that the Lord has provided for us. Here are a few I took recently as we traveled around the area and while we were over in Klerksdorp for the first district meeting of this transfer. 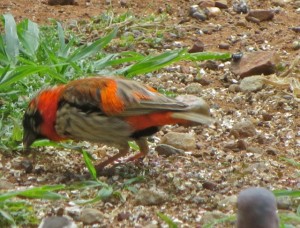 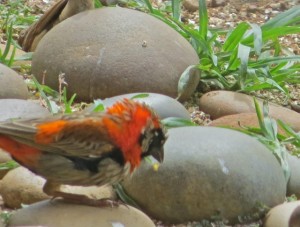 I have shown pictures of the red headed wren that visits our back yard. In the left hand one his neck and head feathers are laid back. In the right one the feathers are standing up signifying he is angry or disturbed. 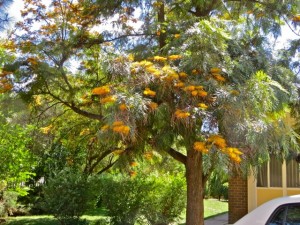 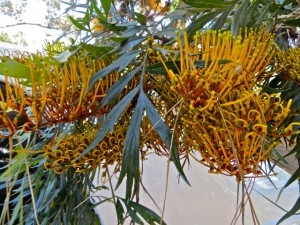 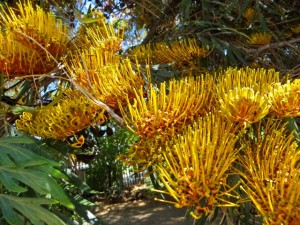 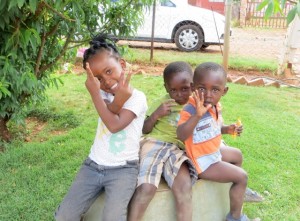 Outside of Klerksdorp chapel is these very large trees and Mary and I noticed the golden seed pods that at first made us think of a pine tree, but you can see from the green leaves around the pods or cones that it is regular flat leaf tree. In the bright sunshine they are quite beautiful. These three children were playing in a yard where president Kwaikwai went to visit. The little guy in the middle started crying when he first saw me. My guess he does not get to see too many white people. But after I gave them all a small treat I was accepted. 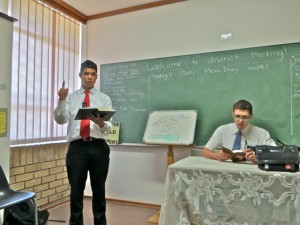 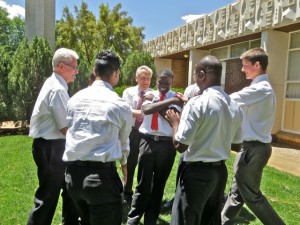 On Friday we went to district meeting. It was the first one for elder Perez as district leader and he did a fine job. He asked elder Liera, his new companion to lead the music. After the meeting elder Dummer had us do a trust activity. One person stands in the center of the rest of us, crosses his hands, and closes his eyes. Those in the circle push him around and if he moves his feet it means he did not trust the others to keep him from falling. 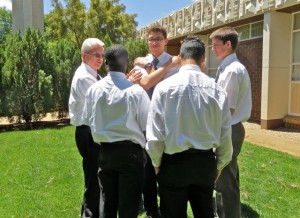 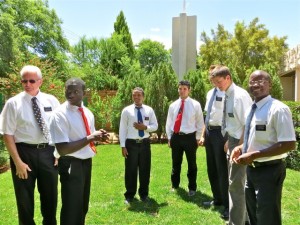 I forgot to take a district picture but the one of the right has eldersÂ Dummer, Mukasa, Ramillarijaona, Liera, Perez (unfortunately mostly hidden but you can see him clearly in the picture on the left where he is in the middle of the circle), Graham, and Mayende.

After district meeting we went to the Pancake House for lunch. While E/S Dummer and ourselves set at one table the six elders had time to talk about missionary work, exchanges and other things before their food arrived.