Not a very productive missionary week for us. I was diagnosed as having the shingles on Friday May 2nd and the doctor immediately started me on anti-biotics and pain pills. The shingles themselves were just annoying but for some reason I have had headaches since conference and that was the reason for the pain medicine. So for most of the week I did nothing but lay around our flat reading but also doing a lot of sleeping.

Mary did go to Church on the 4th so she could play for all the meetings. By the middle of the week I felt good enough to go out and drive Mary so she could hold some piano lessons. On Saturday we had another missionary street display set up. About all I did was to do transportation and give encouragement. It went well and the elders are filled up with appointments for the next 10 days or so.

Sunday as we were getting ready for Church Mary noticed a rash she had not seen before and we were sure it was the outset of shingles – talk about a unwanted Mother’s Day present. She decided it was not a good idea for her to go and expose everyone so although she was to speak during Sacrament she stayed home. Â She was really missed because we are not really good at singing with out the keyboard. I got to speak in her place and for 15 minutes preparation it was pretty good. I count it as a real tender mercy.

After Church the branch held a Mother’s Day/Farewell luncheon. Sister Florence Tsunke is leaving the branch after being a leader here since she was baptized in 2008. By the time I got home I was completely wiped out and slept for about 12 of the next 16 hours.

This morning it looks like Mary does not have shingles because she has no headache and the rash has started to fade. We will see how it is in a couple of days. 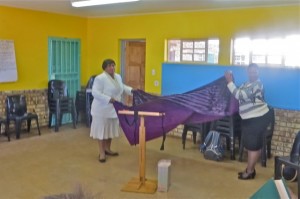 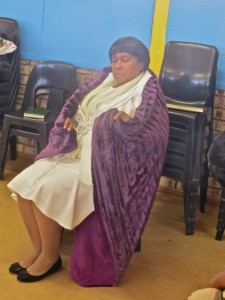 The sisters in the branch gave sister Florence this beautiful purple comforter to take with her as a memory. She looks good in it! 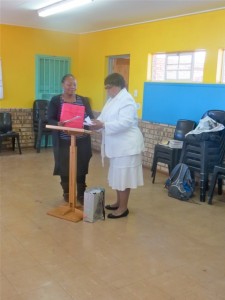 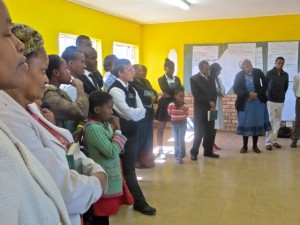 Sister Kujane was one of those who spoke about how Sister Florence was like a mother to her when she joined the Church. Most of the members stayed after the meeting to honor mothes and sister Florence. 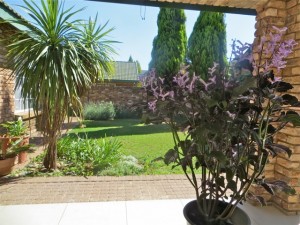 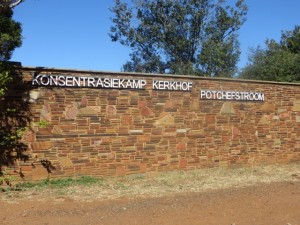 This is what Autumn looks like in our backyard. I felt after sleeping so much I needed to take a walk so I decided to visit the memorial to those who died in the British concentration camp set up here in Potchefstroom during the Boer’s War. All told some 26,000 Boer women and children dies in various camps set up to try and stop their men from fighting. 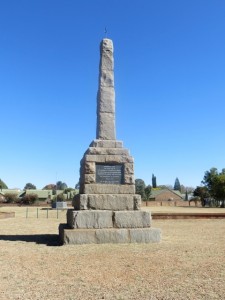 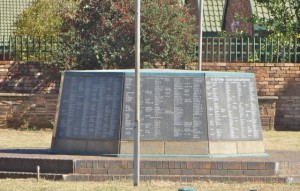 As I walked around the memorial – there are two the first is just in honor of those who died and the other lists all the deaths in the camp. As I walked around reading the names I came across 18 Swanepoels and I immediately thought of our own sister Bobbi Swanepoel. I called her and told her of my find. She did not know about this but she did tell me that her genealogy goes back to the original Dutch settlers in the 15th century. I told her I would take pictures of the name so she could check them against her genealogy. There is a beautiful Dutch Reform Church Â on the same grounds. BTW the green roofs you see in the background are those of our compound – we are just two houses away from this memorial but I had to walk around the block to get there. 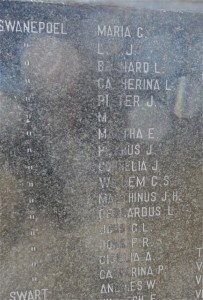 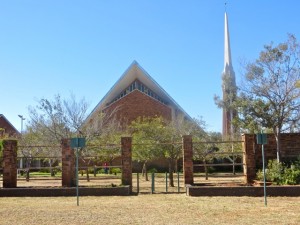