This post spans much of our mission so far. Sister Bobbi Swanepoel lives about 50K from Potchefstroom. Due to her health and lack of transportation she is not able to attend any meetings so once a month we travel up to Parys to visit with her and to bring her the sacrament. She is a lifetime member and was one of the 6 members present when the Soweto branch was formed soon after the revelation of the Priesthood. She is rich source of stores about the early days of the church there. For instance she was told by PH leaders that she could not visit in Soweto at night with a PH member as a companion. So she took her 12 year old deacon with her on all her visits. 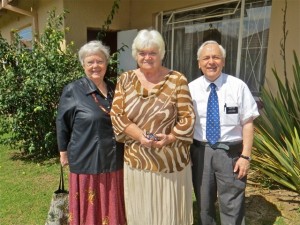 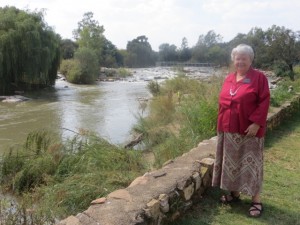 Parys is a ranching and tourist town with the Vaal river running on the outskirts. The Vaal is one of the largest rivers in South Africa and is the largest tributary to the Orange river. We first saw it as we crossed over the highway bridge and both remarked how it was a real river. Sister Bobbi later pointed out that it was approaching winter and that it was actually quite low. In the Spring it often overflows it’s banks and floods parts of Parys. 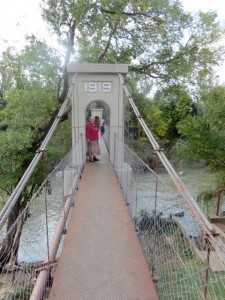 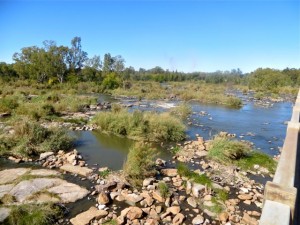 Mary posed on a bridge over a small side stream of the river. Unfortunately the door on the other side it kept locked so we could not explore the island which is mainly a golf course. 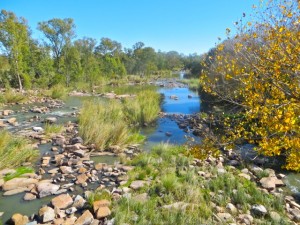 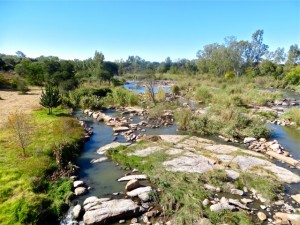 This is a downstream shot and then an upstream shot from the bridge but neither can take in more that about 1/2 the width of the river at this point. 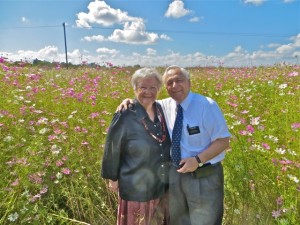 One of the wonderful experience of going to Parys is the kilometer after kilometer of cosmos that line the road. It stands about 4 feet high and reminded us of how much we enjoy cosmos when we are at home. It is mostly pink and white with only a few of the deep purple blooms we love so much. By the middle of April the cosmos has pretty much died out so we are glad elder Knowles took this picture when we went out in March.

4 thoughts on “Catching Up #8 – Sister Bobbi and Parys”