When the Johannesburg post office went on strike some time around August, no one thought that it would go on so long that it would basically stop the delivery of most Christmas packages and letters to the missionaries. However sister Shaw and her daughter realized that the missionaries in their stake were likely to not get any packages for Christmas. They decided that was not going to happen. With the approval of President and sister Dunn not only did they organize packages for the missionaries in their area they contacted other stakes in the mission and found that everyone wanted to help. So many hours on many days was spent gathering, assembling and wrapping 150 packages.

So due to the love for the missionaries and the generosity of money and time from throughout the mission, each missionary received from Santa a brightly wrapped package with an assortment of gifts. Truly this was a great example of the spirit of Christmas! 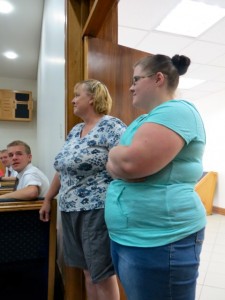