While in Indonesia I took many, many pictures of motorcycle and bicycle loaded with just about anything you can think of. Sometimes it would be people – someone told me they once saw 8 on one motorcycle but I never saw more than 6. I can not find one of my favorite pictures – a motorcycle carrying live chickens hanging off the back fender. I also missed a great one when one went pass carrying 2 five foot rattan sofas on the back.

Here is just a small sampling of what you would find everyday traveling down the streets of Jakarta and other cities in lovely Indonesia. 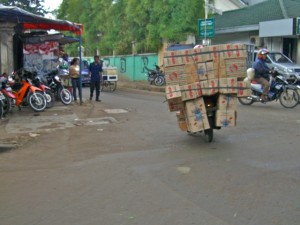 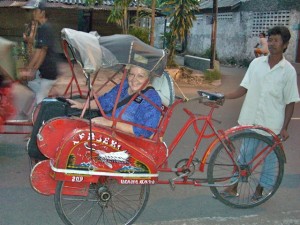 Notice how many motorcycles there are in the first picture. Not only is one being used to deliver an extra wide load but there is another half dozen or so in this single shot. When we were in Solo we rode in a becak – that is a bicycle driven taxi. They are everywhere in smaller towns – they are not allowed in Jakarta. 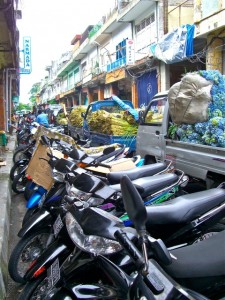 I love this first picture Ã‚Â because it shows four types of transportationÃ¢Â€Â¦car, bikes, small taxi call bjaja, and motorcycle. Notice he is carrying a ladder over his shoulders. If there had been a regular taxi in the picture it would have included just about every way people get some where without walking. The next picture was taken in Bali. One side of the narrow street is packed with parked motorcycles and the other half is jammed with trucks trying to deliver produce and flowers. 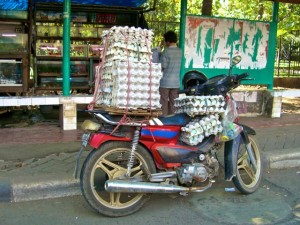 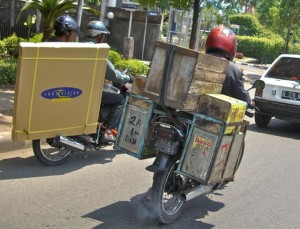 Green eggs and ham anyone. This motorcycle passed us and a little later we found it parked so I could get a picture of real green eggs. Maybe he is buying the ham? Can you imagine the mess if he happened to have an accident. The right hand picture shows the Indonesian version of a portable TV. I never did figure out just what the other bike was delivering in the old oil cans. 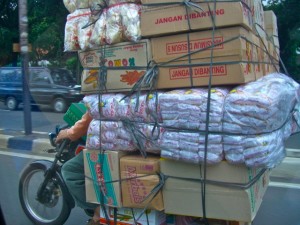 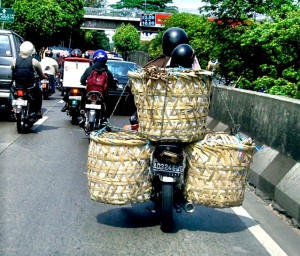 I shot this picture out the window of our van and missed the top. But as you can see the driver is almost buried under his load. If you look closely you will see he even has more load sitting on his lap. Not an inch of wasted space. The last picture is two on a bike with three big baskets of something. I always have wondered if the hot exhaust pipe ever set the basket or what is inside of it on fire.